Steam distillation of young leaves of Melaleuca alternifolia in 18O-labelled water resulted in the 18O-labelling of the principal oxygenated p-menthanes, terpinen-4-ol and α-terpineol. The p-methanes; terpinen-4-ol, γ-terpinene, α-terpinene, terpinolene and p-cymene, found in M. alternifolia oil are primarily formed from cis-sabinene hydrate and to a lesser extent from trans-sabinene hydrate and sabinene. The pattern of the p-menthanes and the enantiomeric composition of terpinen-4-ol found in young and old leaves, regardless of the isolation process are similar to those formed during the acid catalyzed transformations of sabinene or sabinene hydrate. The incorporation of 18O into terpinen-4-ol during steam distillation in H218O supports the formation of terpinen-4-ol and the other p-menthanes from the terpinen-4-yl cation, generated from the hydration of sabinene and/or sabinene hydrate. This same mechanism appears to operate during leaf aging. Around 60% of the terpinen-4-ol obtained from the steam distillates of young leaves is an artefact of the distillation process, although the extent to which terpinen-4-ol is an artefact in commercial distillations will depend upon the age mix of the leaves that are distilled. No precursors of α-terpineol were identified, however, the labelling is consistent with the formation of the α-terpinyl cation. 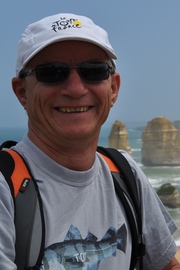